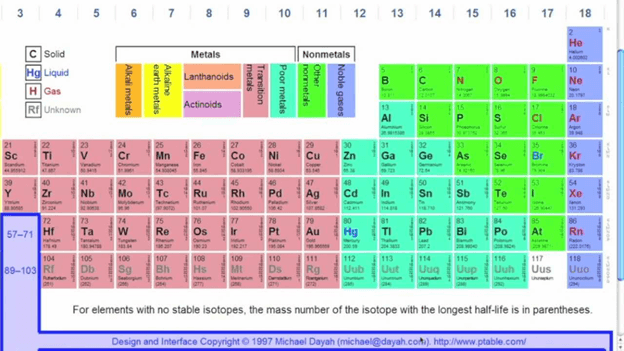 The periodic table also referred to as the periodic table of elements, is a display of chemical elements in a tabular order. The chemical elements are arranged by order of atomic number, the configuration of electrons, and the properties of the elements. The table is made up of seven rows that are referred to as periods. On the left of the structure are the metals, and on the far right are the nonmetals. The table is made up of several columns that are known as groups. The groups comprise of the chemical elements that share the same or similar chemical behaviors. Periodic table alphabetical order means that the elements are listed according to alphabetic order.

How to read the periodic table

Below are some quick tips and guidelines that will guide you on how to read the periodic table.

You may also notice that as you move across the table, the number of protons increases by one. As part of studying the structure of the table, you also need to recognize how the elements are arranged. Typically, they are arranged following the physical properties as well as the chemical features. You can also try and differentiate the metals from the nonmetals and other elements as well.

Once you have mastered the structure of the periodic table, you can proceed to study the elements that are on the table. The first thing you need to consider are the symbols of each element on the table, which generally are made up of two letters or less. Some tables feature a full name, while others contain the symbols only. While studying the elements, it is also essential to consider the atomic number of the element. Note, usually, the number located at the top of the spot where the element is situated. Note that the atomic number is the one that is a whole number and not a decimal. The atomic number refers to the number of protons in an element as well as the number of electrons. Elements with a negative symbol and a positive symbol are those with no ions.

Once you have all this information figured out, you can proceed to use the table to calculate such things as atomic weight, the number of neutrons, and atom mass numbers, among other applications.

Contrary to popular opinion, the periodic table is an essential element as it helps to break down the items that make up all the objects present in the world. For instance, the table consists of carbon and oxygen, which are elements that makeup carbon dioxide. Whether you are a science student, a scientist, or a regular person, you need knowledge of the periodic table.

New machines are the key to make a high quality yarn

The Basics Of 5 Axis CNC Machining

Lean Manufacturing vs Six Sigma: Which Should You Choose?

Importance of Kaizen in Lean Manufacturing