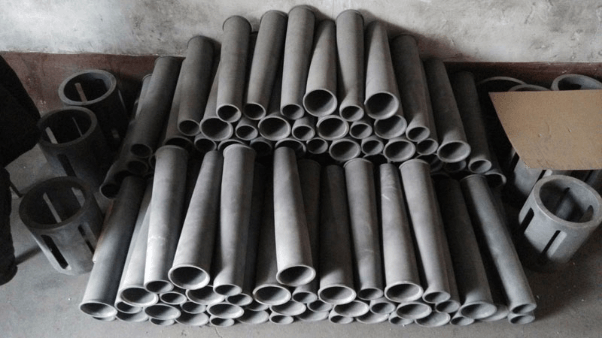 The constant pursuit of engines with excellent energy efficiency has led to a series of innovations. Reaction bonded silicon carbide is a direct result of that relentless pursuit.

Here is an overview of reaction bonded silicon carbide (RBSC) that will reveal its massive significance for a great number of industries. So far, reaction bonded silicon carbide (RBSC) was mainly used in refractories, abrasives, and metallurgy. However, from the look of things, that’s about to change and the use of RBSC will expand in many other industries.

The following overview should give you a clue or a few about the future use of RBSC in new industries.

Reaction bonded silicon is created by adding liquid silicon into mixtures made of carbon and silicon. That produces a reaction between the carbon and the silicon. What comes out of that are silicon carbide particles. The carbon to silicon ration can vary and it depends on the desired properties we want to achieve.

A fully dense reaction bonded silicon carbide (RBSC) has an excellent bend strength at room temperature. It can maintain that until silicon starts to melt. That’s around 1410 ºC at which point it will start decreasing to about 250 MPa.

The main properties that often lead to the selection of RBSC as a material are:

Thanks to its thermal and oxidation resistance, as well as it’s very high-temperature strength, reaction bonded silicon carbide is a top choice for low mass kiln supports. Kiln products such as posts, rolls, burner nozzles, and setters. Their biggest downside is not a technical thing, but cost-related. Typically, these products cost twice or three times more than the ones that feature cordierite.

Thanks to its excellent strength, wear, and high-temperature resistance, reaction bonded silicon carbide is top material for components such as impellers, plates, and screws. Furthermore, RBSC is often used for thrust bearings which are used in heavily contaminated environments that are under constant heavy loads. Thanks to the properties of RBSC, we can have bearings that can operate in temperatures ranging from -200°C to 400°C.

Vanes and mechanical seals made from RBSC has shown to be a success. The parts that included free graphite as a seal nose were particularly durable in hostile operating environments.

RBSC has shown as a top choice for precision components such as optical benches, wafer handling devices, and laser mirror blanks. These are components that are both quite stiff and lightweight and feature great thermal integrity.

Properties such as good weight ratios, endurance during high temperatures, and excellent stiffness are important for all sorts of applications. The only real question is how fast and to what extent RBSC will be used in the many new emerging technologies. There are certain predictions that the demand for RBSC will be exponential in the years that come. But, that is about to be seen and materialized.

Stay Connected And In Style With Inconel Tubing

Why Choose a Metal Shopping Cart?

A breakdown of the types of freestanding bathtubs

Mechanization and Automation in Manufacturing

What is Injection Molding?

What are the essential of a brewery?

What are portable CNC plasma cutters?